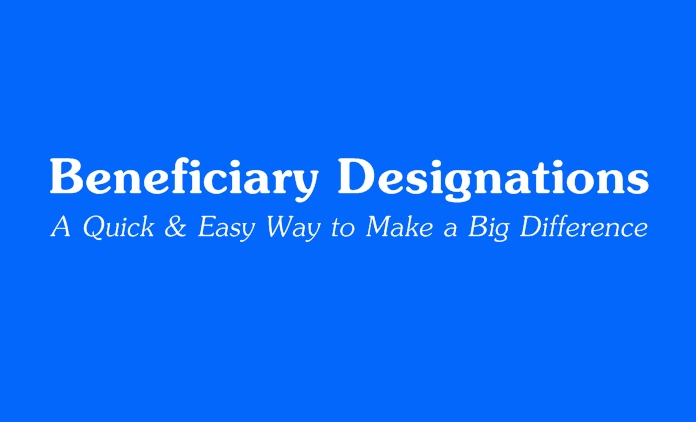 We will begin by going through many of the most common beneficiary designations, show how they should look and point out some of the issues that can occur.

Multiple beneficiaries. There are many instances, particularly with an individual person as insured, that more than one person is the desired beneficiary. Take the example of a single parent with several children, the insured wishes the proceeds to be divided amongst the children. It must be noted that the proceeds need not be divided equally. When listing multiple beneficiaries, it is essential that each single beneficiary be assigned a percentage of the death benefit. Example: Son A 40%, Son B 40%, and Son C 20%. The reason for stating percentages of the death benefit instead of fixed dollar amounts is the size of the benefit may vary over time if you consider a universal life, a whole life policy or even a segregated fund. All create proceeds at death with a tendency to change over time. At the risk of stating the obvious, the percentages must equal 100%. A potential problem arises if one or more of the primary beneficiaries are deceased. In this case with a deceased beneficiary, the proceeds are then divided pro rata amongst the survivors. Some carriers allow the option that if one beneficiary predeceases the insured his/her portion can revert to the insured’s estate. The example of multiple beneficiaries highlights why staying in touch with clients and keeping beneficiary designation current is critical.

It is possible in the case of multiple beneficiaries to have contingent beneficiaries for one or more of the primary beneficiaries. Look at the example above with Son A, Son B and Son C. The designations could look like 40% Son A, or to spouse of Son A if deceased, 40% to Son B or to 3 adult children equally if Son B deceased, and 20% to Son C or to SPCA if Son C deceased.

In Trust For. In certain cases we see ITF designation (in trust for) particularly in reference to minor children. For example, a divorced individual with a child from his first marriage may designate the beneficiaries as follow: proceeds go to (brother) ITF for son. The thought behind the ITF designation is that the funds will be “looked after” by a trusted individual on behalf of the beneficiary. There are however certain drawbacks that go along with an ITF designation. First, the ITF designation does not take into account the possibility that the trustee may be deceased or unable or unwilling to act as trustee. In this case the insurance proceeds are paid to the provincial public trustee to be managed under the government very restrictive guidelines.

Secondly, there is no guidance provided to the trustee as to where the money can be invested nor how is it to be spent. Generally, it is accepted that the trustee will spend money only on the care, comfort, education and betterment of the child. This understanding is not carved in stone and gives the trustee a great degree of latitude as to where the money can be spent. For example, if the trustee decides the child would be better off with a new sports car no one is there to stop him. With no direction as to where the funds can be invested, the trustee could potentially invest in newly issued penny stock with the expectation of making millions. If however, the stock does not perform to the promoter’s representations (imagine that) the child could be left with nothing.

Next, when the child reaches the age of majority he/she is permitted to go to the trustee and demand their share of the proceeds. Most people would not be happy with the idea of their 18 or 19 year old child receiving a large amount of cash. Along the same lines, an ITF designation gives no guidance to the trustee as to how the funds should be distributed and when. For the proceeds of a policy to be managed effectively, a formal trust agreement should be drawn up. This will insure investment guidelines are set, distribution guidelines are set, and the final dissolving of the trust is set. For smaller estates, people still may wish to use the ITF designation but great care must be taken in the selection of the trustee and keeping the trustee designation current.

Irrevocable beneficiaries (IB). Many of us are familiar with the term IB, but in my experience the IB designation does not provide as much security for the named beneficiary as many people suspect. Many people are under the mistaken impression that an IB designation means the beneficiary is notified before any changes are made to a policy. This is in fact not true. The beneficiary designation on a policy cannot be changed without the IB’s written permission. After that, the security of the IB designation mostly stops. An insured can reduce the face amount of a policy, change the investment options on a policy, or even stop paying premiums and the IB is not notified. Only after a policy has lapsed is the IB notified. Now the IB must go to the process of trying, if possible, to get the policy re-instated.